Applied Arts is one of my method classes.  This class had a music portion and we were required to take a song that students can use to learn or remember things.  Using a music program Audacity, I clipped and trimmed portions of  In the Jungle by The Tokens.  Then, I incorporated lyrics that pertained to the Rock Cycle.


So I combined them into a video.  No clips were added due to minor difficulty.

We tried something a little different with this experiment. Most of the posts we have done so far have had an environmental emphasis; this experiment is a physics based lab. Now because of that we had to do a little more research. Neither Rachel, nor I, are physics experts but we recognize the importance of physics in everyday life.

In order to talk about Inertia we need to go over a little bit of basic physics, this means Newton and his laws of motion. Physics is the study of movement. Everything moves but not everything moves to the same degree. Newton described three laws of motion. Inertia deals with the first law; which is sometimes called the Law of Inertia.

The law is a bit more important than just "Objects at rest like to stay at rest and objects in motion like to stay in motion." If we didn't explain a little further you'd think moving objects never stopped! Can you imagine running forever and not stopping?

To amend our statement: Objects at rest will stay at rest and and object in motion will stay in motion unless acted upon by another force. So you will keep running in your straight little line until something makes you stop; like a wall.

So Inertia is what makes it so hard to get out of bed in the morning. It is easier to stay lying in bed than to exert the energy to move. It's also the same reason exercising can feel good. Once you get going it can be hard to stop!

Inertia can also be explained mathematically (we know, something you'd don't usually want to hear). Don't worry though, the formula for inertia is actually quite easy and you've probably heard of it before.

F = ma
"Force equals mass times acceleration." Mass isn't actually the weight of something even though many use the word mass interchangeably with weight. On Earth our weight is an example of Newton's first law and in our case acceleration would be gravity. (It's okay if you don't understand this at first, it is a hard concept.) In physics we show this in kilograms.

This means that something with a larger mass takes more force to get it moving. You can blow on a feather and get it floating but can you blow on a rock and make it move? This is something that people think about everyday without even noticing. Can we lift that object changing its inertia? If it isn't too heavy we can.

It's amazing how simple things like moving a rock or getting out of bed can boil down to such a simple idea as inertia.

If you want to watch a clip on Inertia here is one we found on YouTube that is helpful. http://youtu.be/by-7kkAu2Pg?t=1m24s

Posted by Unknown at 9:41 PM No comments:

This experiment is not specifically for those who do not want to venture out of the house or are shy, but it is a great lesson for a rainy day! There are four parts to this experiment. Each one demonstrates inertia and is very simple. Go ahead, test out those physics skills of yours!
Video at the end showing demonstrations of each activity. 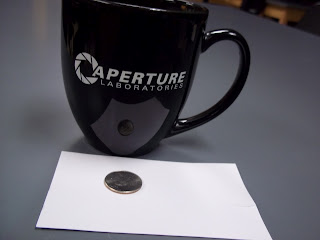 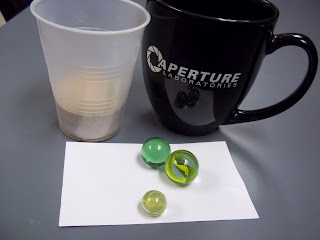 1.) Pour sand or cotton in bottom of the cup.
2.) Place the note card on the cup with the marble in the center of the card.
3.) Flick the card.
4.) Marble will fall into cup.
Video: starts around 28 seconds 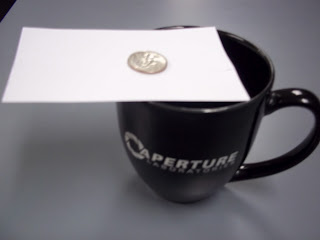 1.) Place note card on the rim of the cup with coin balancing.
2.) 'Karate chop' the paper.
3.) Coin should fall into the cup.
(Caroll tried this multiple times before getting it, Rachel got it on her first shot!)
Video: starts around 10 seconds 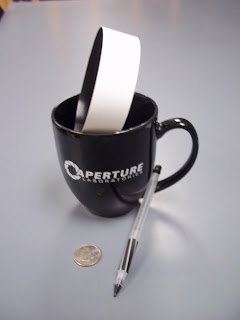 Posted by Unknown at 7:09 PM No comments: