The last experiment we did was "Crystal Candy," and you may find yourself asking
Caroll, how does this relate to science? What kind of lesson can I put with this?
Have no fear! I am here to explain.

What did the lab explain?
This lab is meant to explain the idea of crystal growth. In this experiment you can watch the crystals growing. (You don't want to sit and stare at the cup though... remember 'a watched pot never boils.')
After the cup has been left and the sugar has recrystallized you will see the faces, or sides, of the sugar crystals.

Why does this happen?
How do the sugar crystals form? Well, when you heat the sugar water you allow for more sugar to be added. If you had a cup of room temperature water and added two cups of sugar only some of it would dissolve and most of the sugar would sit in the bottom of the cup. However if you heat the water the sugar will dissolve. This is because heating the solution makes the molecules move faster and allows the sugar to dissolve into the water. This causes a supersaturated solution of sugar and water.

Crystals cannot form without something to grow on. In our experiment the skewer is our crystal holder. In nature it can be a rock or even another crystal. Crystal growth depends on solution (or chemical) type, time, temperature and the space available. A sugar solution is not going to produce quartz crystals. All minerals have their own chemical makeup and a crystal's growth and structure display this. Some minerals have specific shapes that they grow in. Sugar crystals grow very quickly but minerals like quartz, chert, and calcite take a long time to grow.
How fast crystals grow is also dependent on the temperature in which they are growing. Often, it is easier for a crystal to grow in hotter temperatures than cooler ones. What limits the size of crystals though? If you noticed in this experiment the sugar was growing on the skewer but it could not grow outside of the cup. This is the same in nature, a crystal cannot grow outside of the space available for it. A really good example of this is the geode. A geode is a small, durable rock that is often hollow on the inside. In this hollow area crystals can often be found. If the crystals growing in the space reach the center from all sides the crystal must stop growing.
~Caroll
Posted by Unknown at 6:41 PM No comments:

Have you ever seen a crystal and wondered "Where did that come from?" I know I have. This weekend Rachel and I put together an experiment (one that is old, tried and true) that helps demonstrate the idea of crystal growth.

Of all the old-fashioned candy, rock candy is one of the most popular. It is uncommon to find someone who has never tried rock candy. 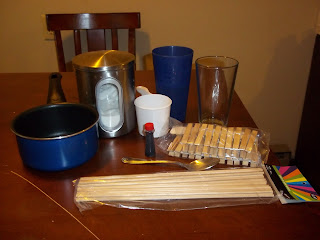 Step One: Attach the clothespin to the skewer and hang across the top of the cup. Have the end of the skewer about 1 inch from the bottom of the cup. 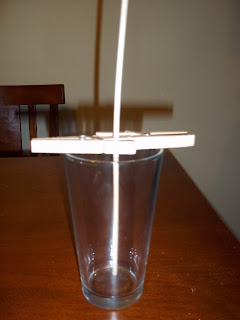 Step Two: Bring the water to a rolling boil. This means, boil the water so there are tons of little bubbles! (Keep the stove on, you will have it boiling the whole time.) 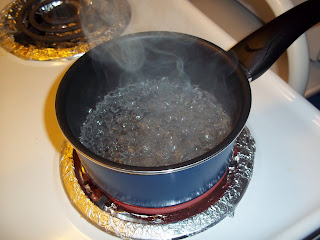 Step Three: Add 1/4 of the sugar to the boiling water. Stir in the sugar so it dissolves. 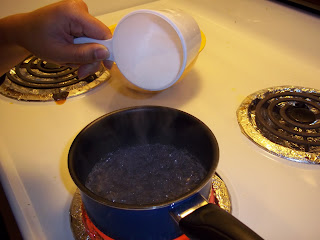 Step Four: Slowly add the rest of the sugar, 1/4 cup at a time. Continuously stir so the sugar dissolves. Add the sugar until you no longer have any or the sugar stops dissolving. This may take a while. 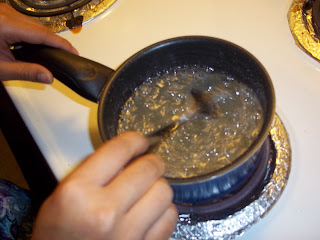 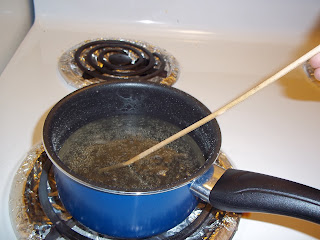 Step Six: Dip the end of the wooden skewer in the sugar solution, then roll the end in some sugar. This creates a 'seed' for the sugar crystals to grow on. 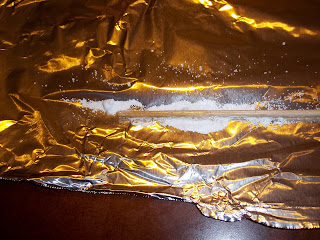 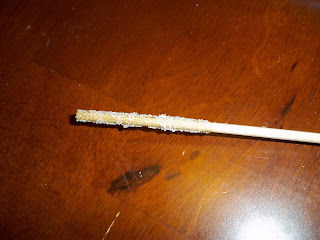 Step Seven: If you want colored rock candy add in food coloring. You want the liquid to be dark enough that it will have a color after the crystals form. 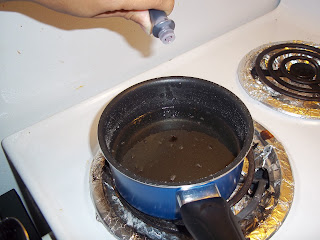 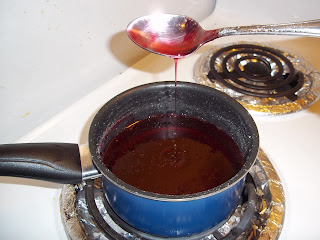 Step Eight: Pour the sugar in the cup. 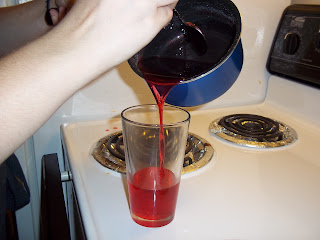 Step Nine: Put the skewer on the clothespins in the cup. Make sure the skewer is not touching the bottom or the sides of the cup. 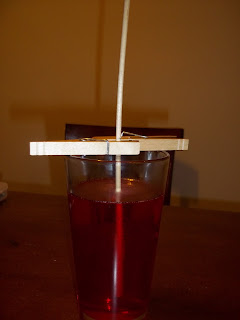 Step Ten: Allow the crystals to grow! Update: Let your crystals sit until they start forming around the skewer. The first time we made ours they instantly started growing and in 4 hours were done. However the second time we tried they did not crystallize for a few days. This difference can be caused by the amount of sugar used or the time the solution is let sit and cool before being poured into the cup. 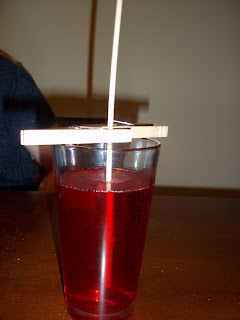 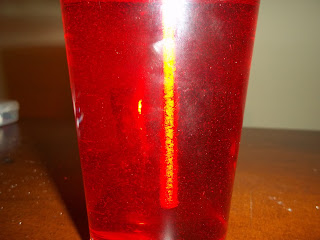 When you take the skewer out of the cup, give it a few minutes to dry. Then enjoy your beautiful crystals!
Lab variables to try: flavoring and other colors

*An explanation of this lab will be put up after this. In that post there will be picture of our rock candy. We accidentally left ours for a day and the whole cup crystalized!*

I've told a few people in the past month that Rachel and I have started a collective blog, and at first they were excited for us.

"Wow, that is great! You guys are trying innovative social learning styles."
They're excited we are trying to integrate the internet and education... until we tell them the topic of the blog.

It's like the word instantly drains all excitement from their faces. A blackhole of joy and all things pretty.

Now perhaps I am exaggerating their reactions, but I must say people show significantly less enthusiasm when I mention the emphasis is on science.

This brings us back to the point of our blog. To share the love of science that both Rachel and I have.

We want others to become interested in science. We understand that not everyone loves it like we do. (We're pretty crazy about it.) What we want is for pre-service teachers, teacher and students alike to enjoy science.

So our goal: To share two experiments a month. We don't have specific days on which we will share them. However we want to share as much of our enthusiasm as we can!

Look for our next blog, we're hoping to teach you about Crystal Growth!

Posted by Unknown at 6:26 PM No comments:

This activity is one that Rachel and I used for an NSTA meeting. Another student (Elizabeth), a Chemistry education major, wrote the lesson plan and the worksheets for the lab. This lesson is used to teach students the basic concept of radiation using M&Ms! When we did this lab with the students we had them perform all of their experiments and then they were able to eat the 'radioactive' pieces. 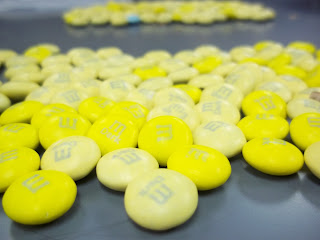 Make sure, when teaching this lab, to tell  your students about the dangers, benefits and uses of radioactivity. A wonderful example is X-Rays, by using radioactivity and wavelengths to see through things!
To start!
Step One: Give each of your students a bag of M&M's. Our bag held about 130 pieces, you should use 100 pieces (or so) for each bag. 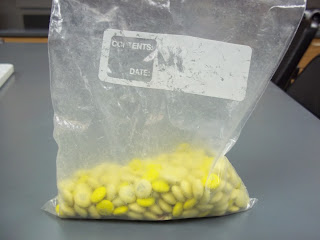 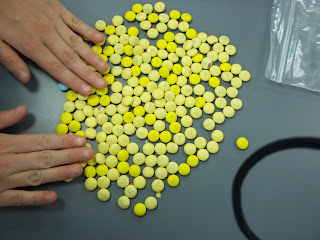 Step Two: Have the students count the M&M's. 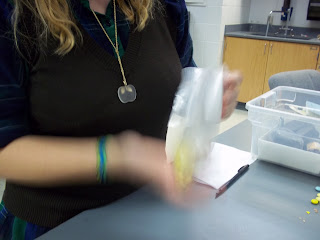 Step Three: Have students place the M&M's back in the bag and lightly shake the bag up. (Since your M&M's are new they shouldn't fall apart as much as ours. Our M&M's have been used for this lab many times; and because they have been stored with Uraninite they are now slightly radioactive and inedible.) 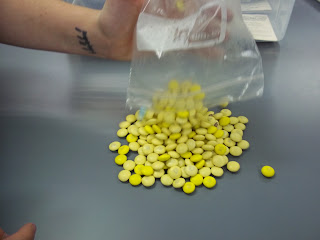 Step Four: Pour out the M&M's on the table and separate the M&M's that have the M showing from those without. 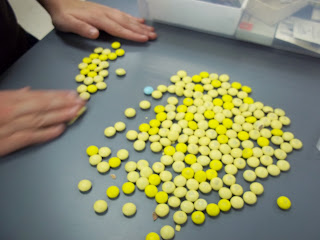 Step Five: Count how many M&M's that have 'decayed.' These would be the M&M's with the letters showing. By doing this multiple times you are showing that each throw of the M&M's should produce around have with letters and half without. A simple demonstration for the concept of half life. 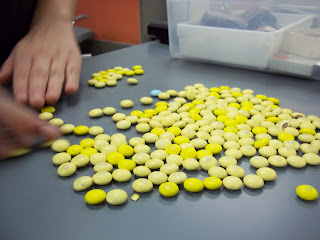 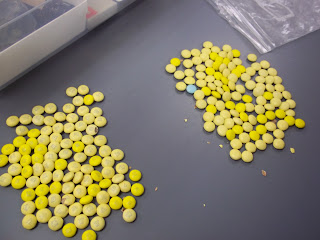 Step Six: Have the students repeat this procedure about 5-7 times. Remember to keep the M&M's that have decayed and the still active ones apart.

If you would like the lesson plan, activity sheet, or more information on this activity contact: notsysy.science.gmail.com